The MKA 1919-XN was admired in concept but not in execution. However, the MKA1919 Match, imported by European American Armory starting in 2015, addresses issues affecting the shotgun, issues that have led to a cottage industry in modifications. 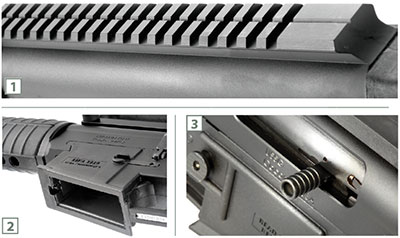 1. Removal of the detachable carry handle exposes a Picatinny top rail for installing optics. 2. The mag well informs you this is no 5.56 NATO rifle. 3. Though not huge, the bolt lever was quick to find and easy to manipulate in a hurry.

The EAA MKA1919 Match is a Turkish-made, box magazine-fed semi-auto shotgun styled similarly to an AR rifle and popular in the Open division of 3-gun (or Unlimited in 3-Gun Nation) competition. What is the particular appeal of the 1919? Well, its similarity in appearance and handling to the AR most competitors use in the rifle portion of 3-gun matches. Having a shotgun with controls similar to those of your rifle simplifies everything and allows you to trust your muscle memory. Something akin to that happened in Bullseye competition, where shooters long ago began using their 1911s for both the centerfire and .45 ACP portions of 2700 matches.

In addition to handling similarly to an AR, the 1919’s detachable-box magazine greatly eases and speeds reloading. Competition shotguns with tubular magazines require specialized ammo carriers that allow competitors to grab two to four shells at a time and—after much practice—insert them into the gun. Such maneuvers are tricky at best and often difficult to perform under stress. Slamming in a preloaded magazine is much faster and easier. Also, if you’re switching between slugs and birdshot in a match, it is far simpler to have magazines loaded with one or the other, thus avoiding confusion. 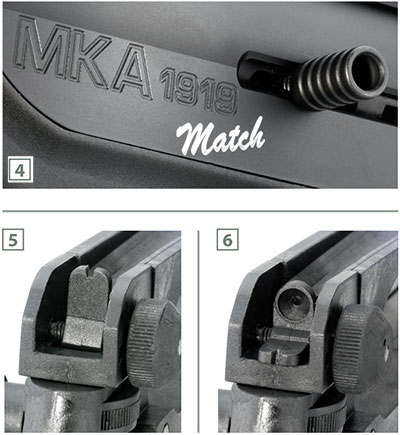 4. A tasteful cursive script identifies the new Match from the older, clunky 1919. 5 and 6. The rear sight offers the choice of a notch or a ghost-ring aperture. Red-dot sights are nice, but not essential.

Despite these inherent advantages, earlier 1919-XNs suffered from some deficits. The gas system could be finicky, working adequately with some loads, but not at all with others. Ambitious use of plastic made the 1919 light, but plastic often lacks the strength and rigidity needed for reliable performance in shotguns. Also, while the earlier 1919’s controls mimicked those of a stock AR, they didn’t mimic those of a competition gun, where oversize, easily manipulated buttons and levers are the rule. Finally, as fit is vitally important in match guns, adjustability was a concern.

The EAA MKA1919 Match was intended to be affordable, with a price point that allowed new shooters to more easily enter the sport. Once in, the consumer/new shooter could trick it out as much or as little as necessary. The problem was that 1919-XNs were not competition-ready in terms of reliability and features. The new MKA1919 Match corrects many of the older model’s flaws, though not all of them. 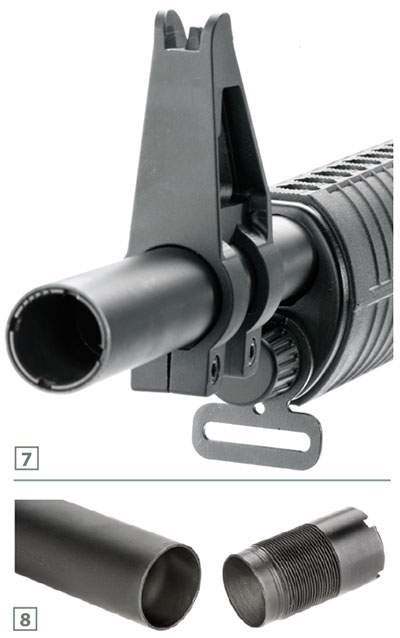 A metal floating feed ramp has been incorporated into the EAA MKA1919 Match. The gas system now includes two rings, one for light loads and the other for heavier fodder. The bolt, locking block and action block have all been redesigned. Both the bolt release and magazine release have been extended, and the safety is now ambidextrous. It is a nice suite of upgrades, addressing many of the most critical factors, yet keeping the gun budget-friendly.

On the range, the gun feels familiar and well-balanced. Unlike tubular-magazine shotguns, the EAA MKA1919 Match is not muzzle heavy. The controls are large and easy to locate, but the magazine release on our sample was quite stiff, requiring a shift in grip to exert enough pressure to release the spent magazine. That could just be a matter of break-in. Releasing the bolt is effortless, given the considerable leverage afforded by the large paddle. However, locking the bolt open requires care and sometimes takes a couple of tries. The hard but sculpted pistol grip is quite comfortable, as is the buttpad on the fixed stock. 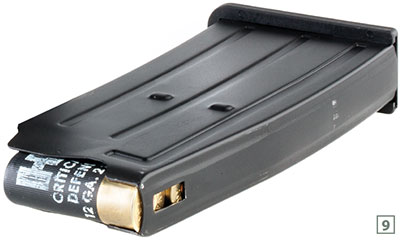 9. Two five-round magazines are included, but aftermarket 10-rounders are available and can be clipped together. There are even two-round mags, should you wish to take it hunting.

The EAA MKA1919 Match ships with the light-load gas ring installed. The heavy-load gas ring initially included didn’t fit. A call to the company resulted in a new heavy-load ring. This one fit like a glove and worked like a charm. We loaded the shotgun with multiple brands of 2 3⁄4-inch buckshot, 3-inch magnum slugs and 3-inch BB shot loads. There was a single failure to go into battery with that last load, but other than that, function was perfect with heavy loads. Cycling was fast and ejection strong. Recoil was unspectacular and muzzle rise minimal. With the other gas ring installed and the magazines loaded with target ammunition, the Match performed without a single hiccup.

While the gun functioned and handled nicely for us, we weren’t able to test long-term durability or how the shotgun holds up to the elements. The polymer lower worked for us, and does an admirable job of holding down both weight and price.

The 1919 is a popular platform in 3-gun. Companies like Firebird Precision do considerable business virtually remanufacturing them, adding all manner of upgrades (including aluminum lowers) and tricking it out. If you have the itch for 3-gun, but not the scratch for a custom-enhanced 1919, in the EAA MKA1919 Match you have a reliable gun with which to get started. Oh, you’ll want additional tweaks down the line—the thing is, now you don’t need them just to get started.

END_OF_DOCUMENT_TOKEN_TO_BE_REPLACED

SCCY Industries looks to continue its remarkable sales pace with the introduction of the DVG-1 and DVG-1RD pistols.

The Korth marque may be alien to most American firearm enthusiasts, but the German company’s revolvers are among the finest firearms on the planet.

Volquartsen Firearms is expanding its line of 22 LR pistols with the new ENV pistol.

First Look: New Holsters from VersaCarry for 2022 | An Official Journal Of The NRA