It was March 1986, and I had just arrived in Paris for the first time in my life. With a few other students from my study-abroad program, I rode the Metro to the landmark where our Paris experience would begin: Place De La Concorde. But, as we all climbed up to street level, my attention was immediately distracted by the site of a policeman from the Gendarmerie Nationale who was positioned by the fountain of Maritime Navigation.

He was dressed in a dark blue tactical uniform, and he carried a magazine-fed, semi-automatic rifle. Although I was only a 16-year-old high-school student at the time and, therefore, did not know much about firearms, I immediately recognized the unmistakable profile of the Ruger Mini-14. Ever since that encounter nearly 30 years ago, I have been interested in learning more about the French use of this prolific and successful semi-automatic American sporting rifle.

In 1978, the French Service de Sécurité du Ministère de l'Intérieur (SSMI) sought to adopt a new carbine—mousqueton in French—to replace the aging MAT-49 submachine gun that was reaching the end of its service life. By this time, national security forces and prison guards were in need of something more than a shotgun or submachine gun to provide the kind of firepower needed to meet the challenges of maintaining law and order in the often troubled urban reality of modern France. Only a lightweight, magazine-fed, semi-automatic firearm in a modern caliber would do the job. Also, since this new gun would be used for police and internal security work, the SSMI wanted something that did not look quite as militaristic as the FAMAS assault rifle. 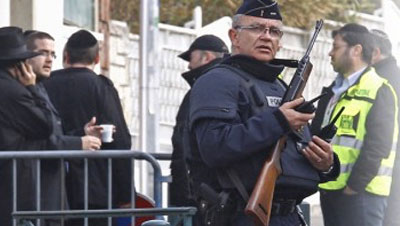 Despite resembling a Mini-14, the Mousqueton A.M.D. was developed for use by French government agencies.

With those needs in mind, the French government placed an order with renowned U.S. gunmaker Sturm, Ruger & Company of Southport, CT for its Mini-14 rifle chambered in .223 Rem. These French-contract guns resembled the standard commercial Mini-14 from the late 1970s in nearly every way, but the receiver markings read:MousquetonA.M.D.   -   5.56A.P.

The "A.M.D." stands for Armement Moyen de Défense ("intermediate defense weapon") and the "A.P." stands for Administration Pénitentiaire ("prison administration"). In a departure from the U.S. commercial Mini-14, the Sturm, Ruger roll marks were placed on the left side of the Mousqueton A.M.D.'s receiver, below the wood line. In addition, guns produced under the French contract were delivered with a black plastic upper handguard and a checkered stock with a recoil pad and sling cutout.

The Mousqueton A.M.D. was used by several governmental agencies within the French Interior Ministry: the Police Aux Frontières ("P.A.F."—Border Police), the Police Nationale Compagnies Républicaines de Sécurité (or "C.R.S."—Riot Control Brigade) and even the Army's Groupe d'Intervention de la Gendarmerie Nationale ("GIGN") special operations unit. These export Mini-14s served through 30 years of often-troubled French domestic history, and only began to be replaced by the Heckler & Koch G36 rifle in 2008. Today, the collecting public in France can own the Mousqueton A.M.D., but only as an Arme Neutralisée—or deactivated weapon.

Must-Have Items for Your Range Bag

Fun Friday: My Winchester 1897 and the "King of Hollywood" | NRA Family

END_OF_DOCUMENT_TOKEN_TO_BE_REPLACED

X-Vision Optics is releasing a new thermal reflex sight offering an excellent price to performance ratio and also designed with versatility in mind.

Keep your defensive firearm is secure and away from prying hands.

A durable and low-profile belt that helps you carry your gear without standing out from the crowd.

Mount a red dot to your shotgun and keep your spare shotgun ammo close at hand.

The Best of the Blowbacks: Mauser HSc and the Heckler & Koch Model 4

In the April 2022 issue of Shooting Illustrated, this column looked at my all-time favorite carry gun, the Colt Model M or 1903/1908. This month we look at my favorite European semi-automatic, the Mauser HSc and its cousin, the Heckler & Koch Model 4.

The bolt-action rifle manufacturer joins other companies such as Lehigh Defense and Chip McCormick Customs.

The Great Shooting Stance Feud | An Official Journal Of The NRA

Know-How: Sharpen a Knife | An Official Journal Of The NRA

How to Sharpen a Knife, How to Use a Knife Sharpener, Work Sharp
END_OF_DOCUMENT_TOKEN_TO_BE_REPLACED
Guns