AR Optics on a Budget

AR Optics on a Budget

My current guilty pleasure is a Templar Custom Multi-Caliber Weapons System. The caliber-changing carbine has 18-inch barrels chambered in .223 Wylde and 6.5 Grendel, and a 16-inch .300 AAC Blackout barrel on the way. All three chamberings are solid, mid-range performers for target shooting, defensive work or hunting up to deer-sized game. To wring the best performance out of these calibers and the weapon in which they are chambered, I needed an optic that performs from point-blank distance out to several hundred yards.

Luckily, the market has responded in the past few years with a wide range of reasonably priced commercial optics designed for the AR platform, and you don't have to break the bank to get them.

Firefield, Leatherwood and Weaver are just three of the companies that have addressed the needs of AR shooters desiring reasonably priced scopes, and they have each done so in a unique way. Nikon also has some great choices, which ShootingIllustrated.com has covered in the past.

As the least-expensive scope in this review, the Firefield 1-6x24 mm 1st Focal Plane Illuminated Riflescope packs a ton of performance in a shockproof, waterproof 30 mm-tube scope with an MSRP of $215 and a street price about $30 below that. It comes with mounting rings, flip-up lens covers, a lens cloth and a limited lifetime warranty.

It was the only scope I tested with both red and green illumination options, and has five levels of intensity for each color. The eye relief on Firefield is excellent, and assists in tracking moving targets at lower levels of magnification. On the higher-magnification settings, the first focal plane hashmarks are set in mils to assist in ranging, though the .5-MOA adjustments are designed for practical ranges, not extreme distance shooting. 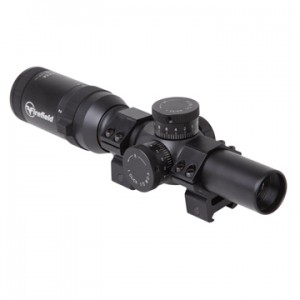 The scope does a solid job of gathering light in normal daylight conditions despite its small objective lens, and any fade in light transmission at normal ranges (inside 200 yards) under changing light conditions is mitigated somewhat by the illumination options.

The windage and elevation adjustments were audible and tactile, and the target-style turrets were simple to adjust by hand—ultimately my chief concern. When being run in a 3-gun match or hunting in thick brush, the scope's turrets are prone to being occasionally bumped into things, and this could result in the zero being thrown off. One could just as easily argue, however, that this style of turrets could be an advantage for a range-testing various loads or for varmint hunters needing to quickly adjust the scope for targets at different ranges. Other than that minor quibble, the Firefield packs a solid feature set into a reasonably priced package.

The Weaver Kaspa 1.5-6x32 mm is another AR-optimized scope that runs around $200 at retail and gives you a good value for your buck. As the "32" suggests, the 32 mm objective lens gathers more light than the more traditional 24 mm objective of most low-power 30 mm-tube AR scopes. When combined with the fine Ballistic X reticle, it provides a great sight picture with very sharp images.

The Kaspa's .25-MOA lockdown turrets, combined with the holdover reticle optimized for range estimation and performance with .223 Rem. 55-grain loads out to 500 yards, means a "set it and forget it" option exists for those shooters who like to zero their scopes at a known distance and use the ballistic holdover hash marks instead of dialing in windage and elevation. For shooters who prefer to dial in their shots, the turrets can be used without tools by pulling the turret knob up (or out) and making the desired adjustments. 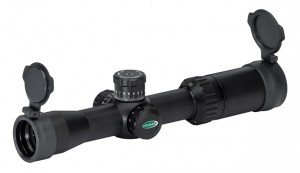 If there is a downside to the Kaspa, it may be the lack of power to the red illuminated reticle. Only the center of the reticle is lit (which is actually my preference), but the claimed 11 levels of brightness leave something to be desired, with the perceptible levels of brightness between each setting so small as to be almost indistinguishable. Even the highest setting proved to be difficult to see in daylight. Weaver should perhaps consider offering fewer and more distinguishable brightness levels.

The Weaver isn't designed for close-quarters battle, but the Kaspa is an excellent scope for the AR shooter who primarily uses his rifle for mid-range hunting or range work, as the fine crosshairs of the Ballistic-X reticle lend themselves to precision shot placement. 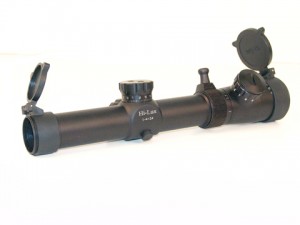 The third scope I tested pushes the boundaries of what you could consider a "budget" scope to the breaking point, ringing in at more than $300 retail. Unlike the general-purpose Firefield and target/hunting-focused Weaver, the Leatherwood 1-4x24 mm CMR Tactical has a military heritage that traces itself back to the scopes on American sniper rifles during the Vietnam War.

The CMR isn't as bright as the larger-objective Weaver, but it is still very good for a scope with a 24 mm objective. Externally, the CMR features zero-locking turrets that prevent the scope from being knocked off zero, but still allow for minimal adjustment in the field. The CMR has an illuminated, green circle-dot reticle over a range-finding horizontal crosshair and drop-compensating, lower-half partial crosshair calibrated to mil-spec 62-grain 5.56 NATO and 147-grain 7.62 NATO ammunition.

The one quibble some may have with the Leatherwood's illumination is it does not precisely and evenly overlay the etching over the circumference of the circle. I found this to be a non-issue that did not affect the scope's performance in any way, but it may be annoying to perfectionists.

The CMR's circle-dot really shines at the lower magnifications of 1X and 2X where it can perform as a both-eyes-open dot sight for the acquisition of close range and moving targets, while the 1-MOA dot works beautifully at 3X and 4X for precision shots. Frankly, I think the range-finding 1-mil hashmarks on the horizontal crosshair are great in theory, but likely to be ignored by most recreational shooters who tend to shoot at known ranges or who prefer to guesstimate range.

There you have it: three variable power scopes optimized for the AR platform that won't break the bank, and which will perform or outperform the practical needs of most AR shooters at the short to medium ranges at which the platform works best.

I Carry: Springfield Armory Hellcat OSP Pistol in a PHLster Skeleton Holster | An Official Journal Of The NRA

Preview: CMMG Barrel and BCG Kit In .45 ACP | An Official Journal Of The NRA

END_OF_DOCUMENT_TOKEN_TO_BE_REPLACED

Sightron is launching of a new line of S6 5-30x56 ED premium riflescopes for long-range pursuits.

Here are five more neat new things we saw at SHOT Show 2022 on our last day on the show floor.

The .327 Fed. Mag. cartridge has long been overlooked, but it is a powerful, versatile option for personal protection. Taurus has recognized the .327's appeal and is now offering an affordable revolver chambered for this hidden gem of a self-defense round.

Galco changed the bellyband concept with the new Underwraps Elite, which allows concealed carry of a handgun and accessories around your midsection with myriad options for the pistol's location, added comfort and the ability to carry EDC accessories like spare magazines and a flashlight.

New for 2022: Blackhawk Knoxx AR Polymer Handguards | An Official Journal Of The NRA