by posted on May 27, 2011
Guns
Support NRA Shooting Illustrated DONATE

They were outnumbered, undertrained and facing what was the world's most formidable fighting force 234 years ago. The odds were desperate, made worse by an unimpeachable strategy that dictated soldiers square off in straight lines at close range. But in the frontiers of the New World, where pushing back the wilderness and putting meat on the table made accurate shots mandatory, a new kind of firearm had become commonplace. It had lands and grooves to increase effective range, and when beleaguered bands of Patriots formed for an engagement, many brought their rifles and marksmanship skills.

Despite claims from the Redcoats that shooting soldiers from long range was an inhumane atrocity and ungentlemanly, the Continental Army stuck to its unconventional guns, ultimately winning our independence. That American spirit and refusal to surrender in the face of long odds continues to thrive today, and Patriot Ordnance Factory is a sterling example.

Long before the black rifle bonanza swept the nation, Frank DeSomma left his position as an aerospace process engineer and established the company in Glendale, AZ. He brought with him a deep knowledge of things mechanical and understates his approach to firearms with a simple, "Heat is the enemy of mechanical items." 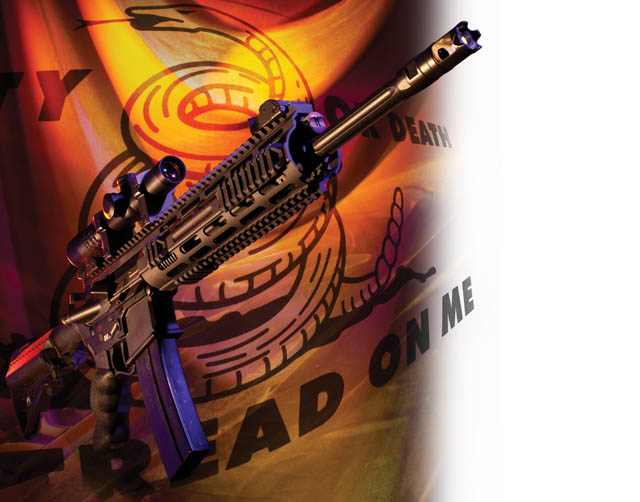 The Patriot Ordnance Factory's P415 is 100 percent American made.

With that in mind, in 2004 Patriot Ordnance Factory (POF) offered what DeSomma describes as the first regulated, short-stroke, gas-piston AR that was sold on the market. Criticism was instant. "If it ain't broke, don't fix it" was the most popular indictment—after all, direct-gas-impingement systems have been proving their reliability on battlefields since the '60s. "We were told many times we were fixing a non-issue regarding heat," he said, "that the rifle would never shoot accurate due to harmonics…"

Companies, even within the firearms industry, often make lofty claims about their products. But after a POF representative removed one of its gun's bolts after a lengthy range session, holding it only moments later against his cheek to demonstrate its cool operation, he had my attention.

When the company's P415 6.8 SPC Mid-Length rifle arrived for testing, everyone agreed the quad-railed fore-end was an amazing piece of engineering. Rails are milled into a monolithic unit, reducing the chances of anything rattling loose at an inopportune moment and minimizing the headache when mounting optics. DeSomma explained by slightly increasing its thickness and making it a single unit, he addressed another of those enemies of all things mechanical—vibration. 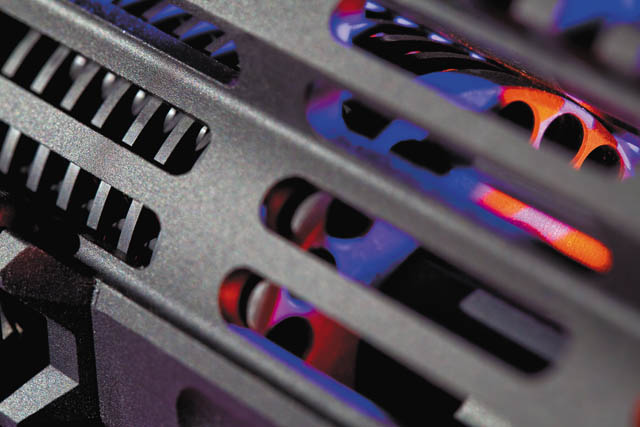 One of the more unusual features on the P415 is an oversized barrel nut that functions as a heat sink where it's needed most.

For testing, I mounted a Nightforce NXS 2.5-10x24 mm scope. Using Silver State Armory's 85-grain Barnes frangible load, I was able to print a pair of 5⁄8-inch, five-shot groups at 100 yards, although the five-group average was 1 1⁄4 inches…that's operator malfunction. The tight groups were in the middle of the shooting session, so heat and dirt certainly didn't play a part in my ineptitude.

The P415, like all rifles from POF, has an oversized barrel nut that works as a heat sink. Dissipating that accuracy-robbing thermal energy is such an important component of the design, you can hardly overlook the unit under the free-floated handguard. The 3⁄4-inch group Hornady's 110-grain TAP turned in during the last five-shot group of my range session testifies to its effectiveness. At this point, the muzzle brake was so hot I couldn't put the rifle back in its case, yet the receiver remained cool.

There were no failures to feed or function during testing and of the four loads tested, Hornady's TAP produced the best five, five-shot-group average at 1.1 inches.

Torture testing began with my grandkids—after 50 rounds I had to tell them to quit salivating. All of them are recoil sensitive, and their unwillingness to surrender the gun is evidence of the POF designed and manufactured triple-port muzzle brake's effectiveness. 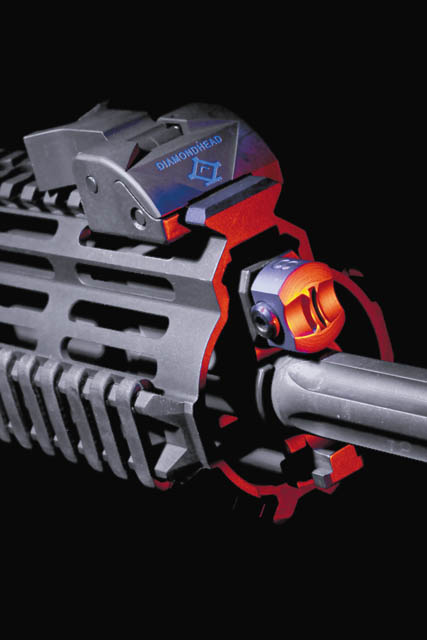 The P415’s free-floated barrel helps wring out the cartridge’s accuracy. Its gas plug can be adjusted for suppressed or normal fire.

Then it was time for cleaning. DeSomma explained that as an engineer, one of his duties was streamlining processes while maintaining quality control. If it took one of his employees 4 hours to put together one of POF's guns, he said, then they'd be a lot more expensive and way too complicated for routine maintenance.

I put his field-stripping claim to the test with my youngest grandson. Without me touching the P415, he had the bolt, piston and op rod out for cleaning in 3 minutes—something he'd never done before. After a good scrubbing, it was back together in less time and he was on the phone bragging to his father. 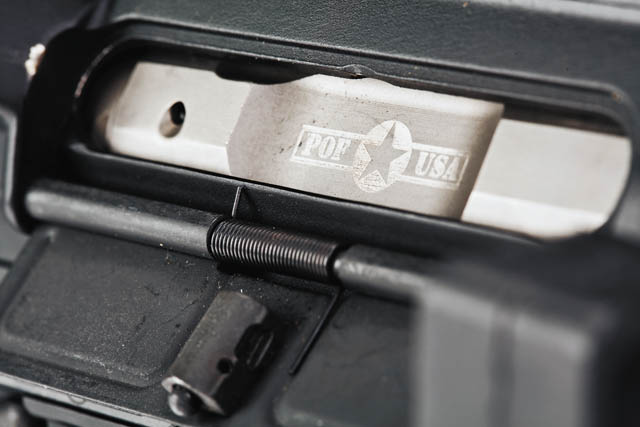 About the only self-indulgence on the rifle is the POF logo on the bolt. The company lets its guns do the talking otherwise.

One of the more unusual claims from Patriot Ordnance Factory is its ARs don't need lubrication. I certainly wasn't going to hang onto the P415 long enough to test that claim for a prolonged period, but I didn't add oil or clean until more than 200 rounds were downrange. The chrome-plated bolt was extremely easy to clean after the range sessions, and there was very little carbon buildup on the piston or op rod. A little fouling seemed to collect around the gas plug, which can be adjusted for suppressed or normal fire.

The 16 1⁄2-inch, corrosion-resistant Rock Creek barrel is fluted for enhanced heat dissipation and it is constructed from vanadium-alloy steel—tough enough to be rated for machine guns. The test gun came with a pair of optional, flip-up Troy Industries sights.

Pick up the gun and you can't help but fall in love with the pistol grip. Beyond a doubt this Ergo grip, made by Falcon Industries, is one of the most comfortable around today. The Norgon magazine release is ambidextrous as is the bolt release.

In regard to the trigger, I found it a little heavy. It would be easy to blame it for my inconsistent groups, but in all honesty, there was no creep and it was plenty smooth for work from a sandbagged rest.

The real differences are internal, though. In the bolt carrier, a roller cam-pin helps reduce friction and the heat it produces. The industry has finally trended toward the company's bolt-carrier design that reduces bolt tilt, and the piston operating system has only three parts—regulated gas plug, gas piston and op rod. 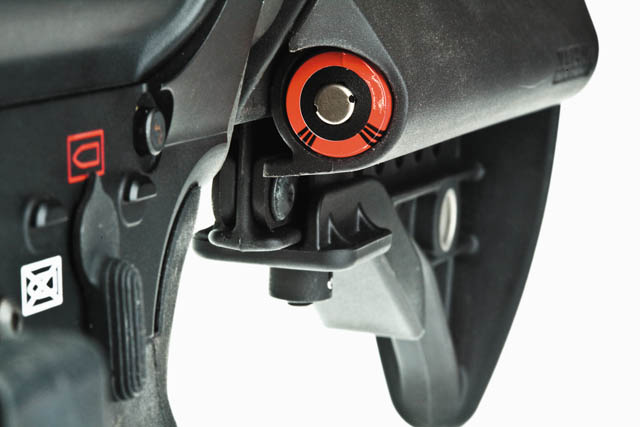 Spare CR123 lithium batteries can be stored in the adjustable Vltor stock, which locked positively and adjusted easily.

Coupled with the company's Modular Railed Receiver and two-piece upper-receiver design, the P415 is capable of sub-MOA groups out of the box. "All these features help to reduce heat, flex and vibration that affect all mechanical designs," DeSomma said. I didn't quite get it done, but when the last five-shot group of a hasty range session prints 3⁄4 inch, the rifle's up to the task.

This month, most of us will celebrate Independence Day with fireworks, barbecues and family gatherings. But year round, DeSomma quietly celebrates the American spirit with each AR he ships. All raw materials that go into POF rifles are produced in the United States. So are all the parts, and the company is 100-percent U.S. owned and operated. DeSomma's patriotism showed when he said, "The United States is the greatest nation on Earth because of our rights and our freedoms."

It's hard to argue with his sentiment, and it's just as irrefutable that given its innovative design, inherent accuracy and origins, the Patriot Ordnance Firearms P415 6.8 SPC lives up to its American roots.

Pump vs. Semi: Which Shotgun is Better for Personal Defense?

Why Defensive Firearms Training is So Important

The ArmaLite Story | An Official Journal Of The NRA

END_OF_DOCUMENT_TOKEN_TO_BE_REPLACED

In today's episode of "I Carry," we have a Taurus G3 TORO optics-ready pistol equipped with a Bushnell RXS-100 red-dot sight and carried in a Kinetic Concealment outside-the-waistband holster.

Recently, while shooting a Norinco SKS, I experienced a failure to go into battery. Upon removing the cartridge, I found the round to be “shrouded” by another brass casing.

Grip and hold on the firearm are often viewed by handgun shooters as one and the same. However, seasoned defensive and competitive shooters break down handgun shooting stability into two distinctly but equally essential subcomponents: grip versus hold.

New from FN America is the FN 303 Tactical Less Lethal Launcher with a modular chassis system that allows operators and armorers to quickly customize the buttstock, grip or sighting system.

Diamondback Firearms is introducing the Diamondback Sidekick, a 9-shot, single- and double-action rimfire revolver that has an interchangeable swing-out cylinder.

American Hunter | 5 Steps to Get Your Rifle Hunt Ready